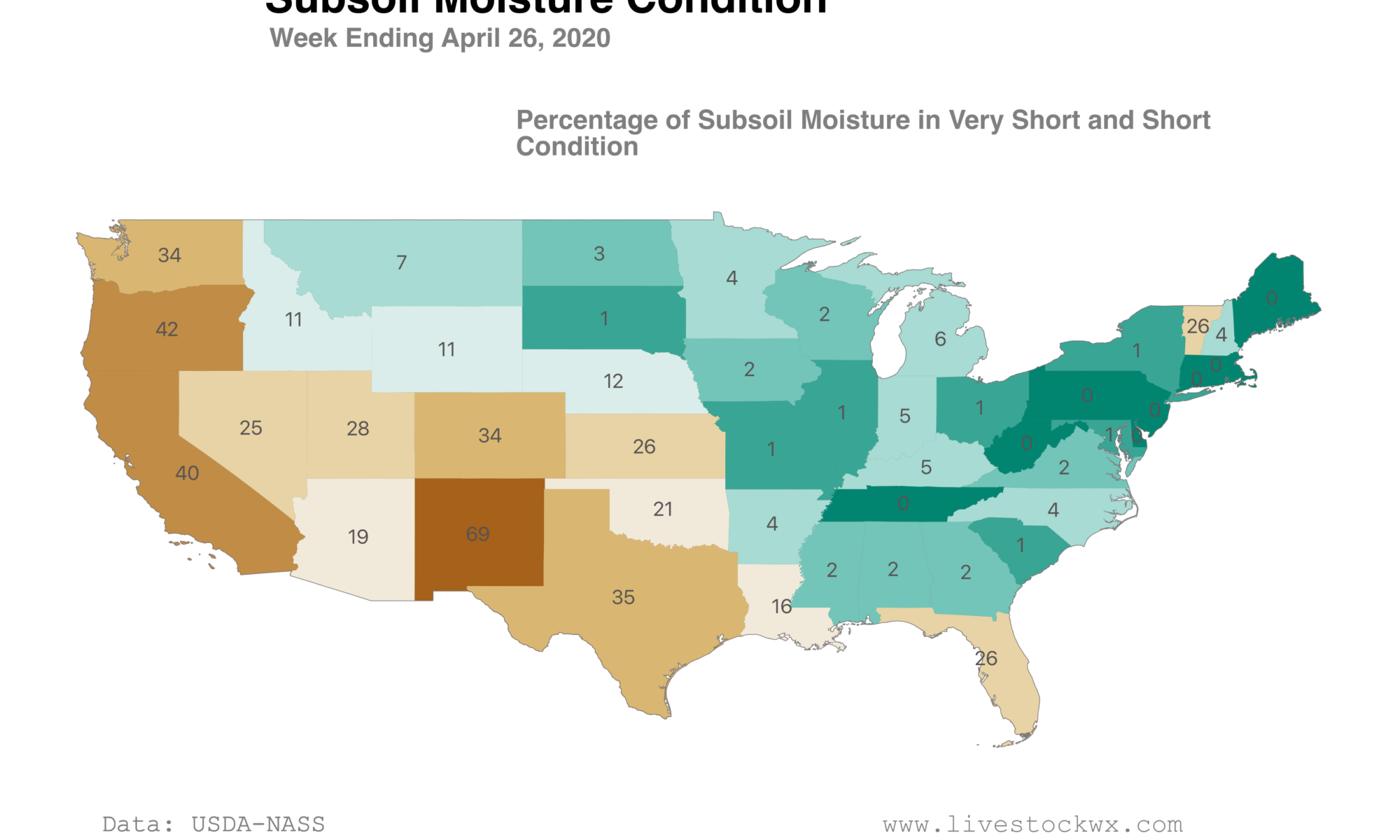 Subsoil Moisture Update: Dry in the West, Wet in the East

USDA is expected to release its first pasture and range report next week for the 2020 growing season.  In anticipation of the report we thought we would take a look at the current state of soil moisture and where we stand with drought around the country.

The map below shows the percent area of subsoils considered in the Very Short and Short categories for each state by USDA.  Note the striking divergence between the West and the Midwest and East. 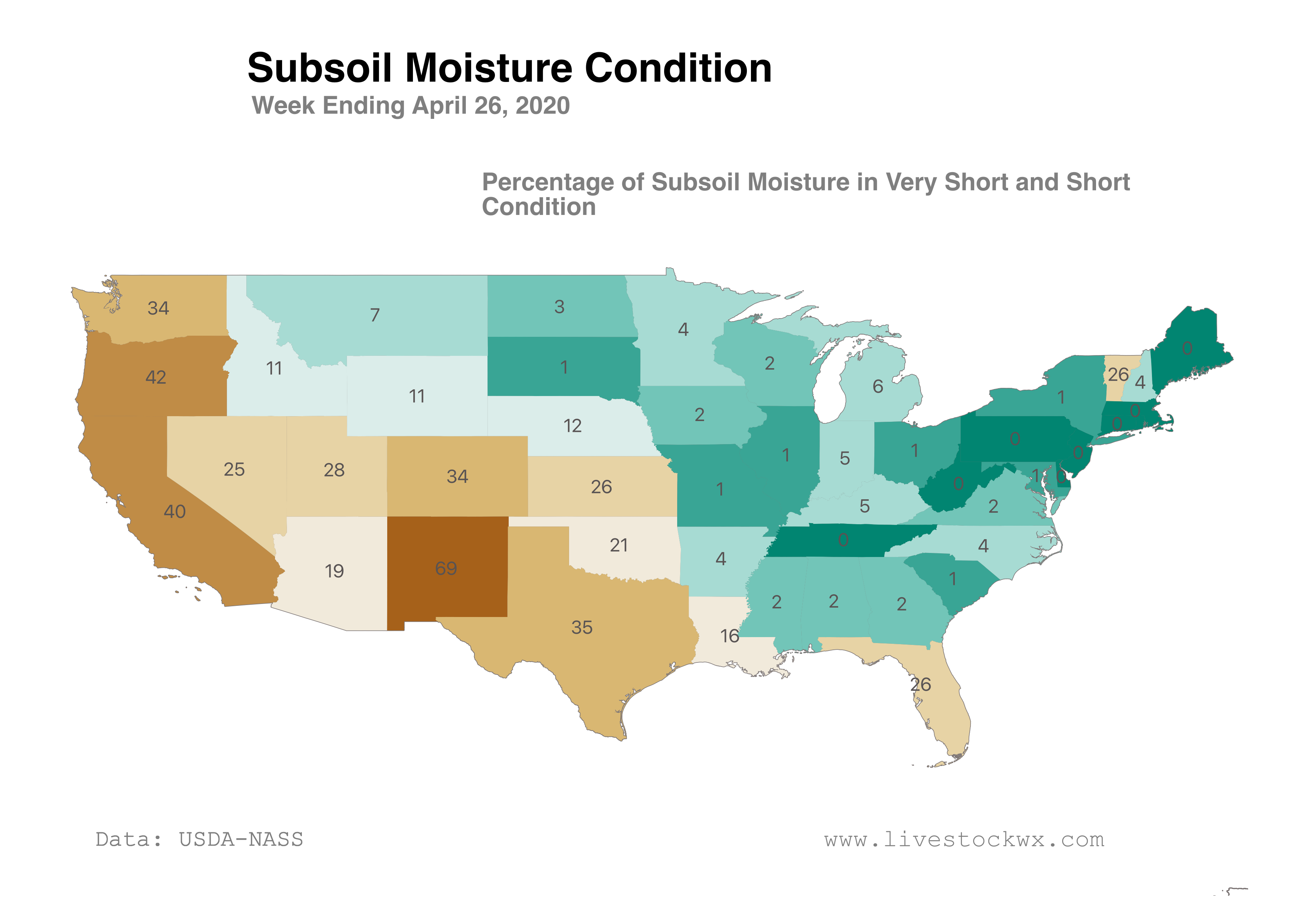 If you want a better break down for each state, the map below shows a new tool by NASA that estimates root zone soil moisture—among other things—each week for the Contiguous U.S.  The data are from the GRACE satellite mission and are percentiles based on averages between the years 1948-2012.  The most current map paints a fairly somber picture for parts of New Mexico, Colorado, and the West/Pacific Northwest. 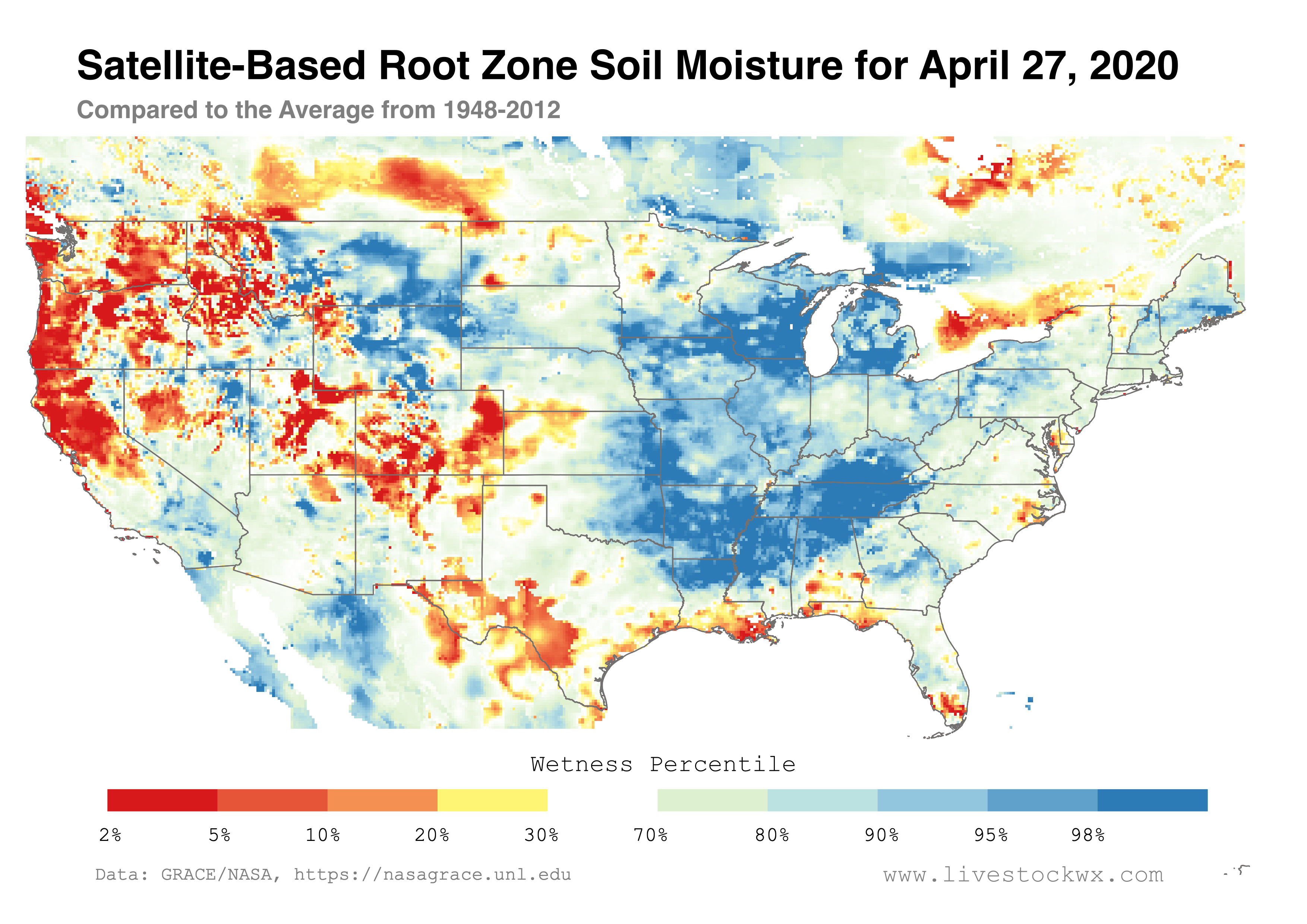 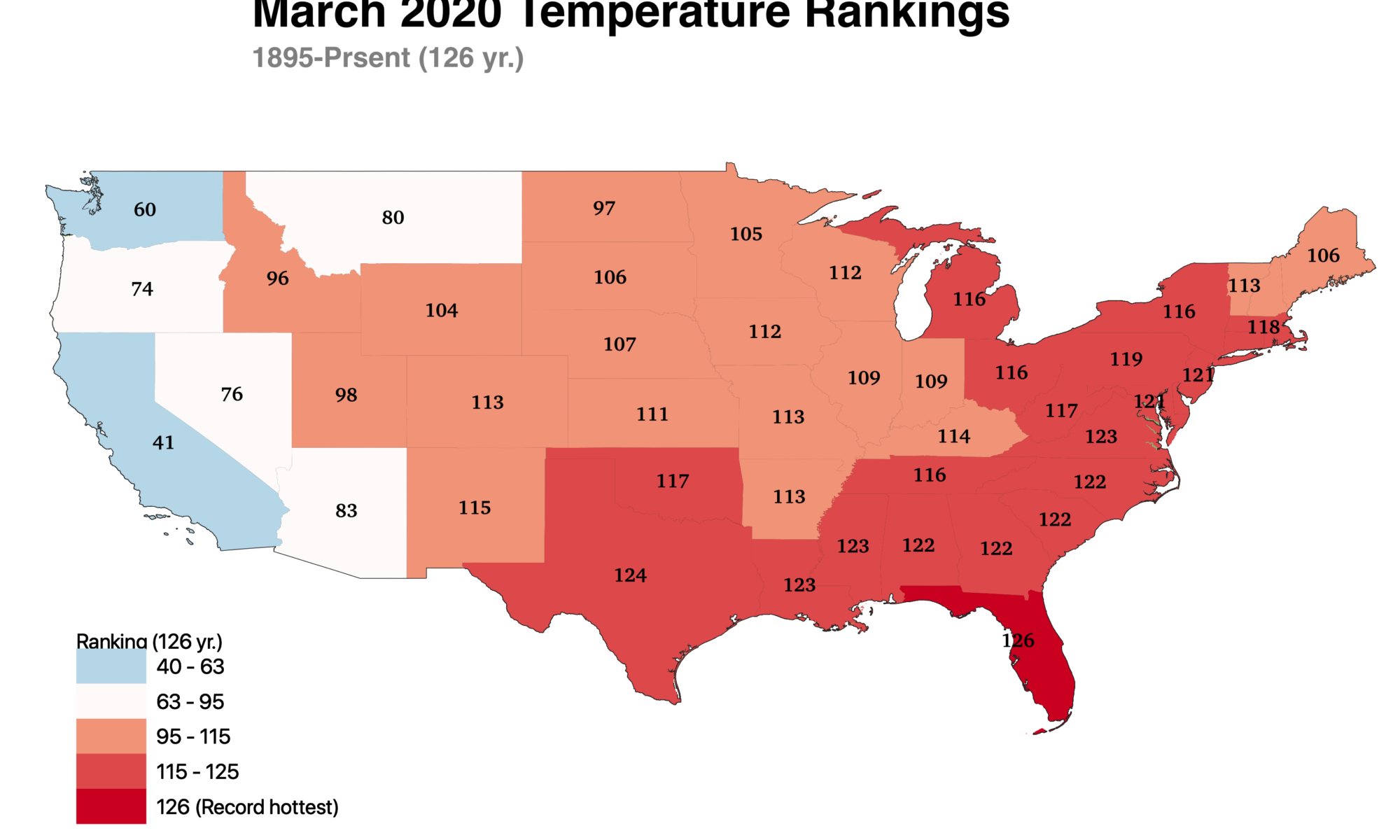 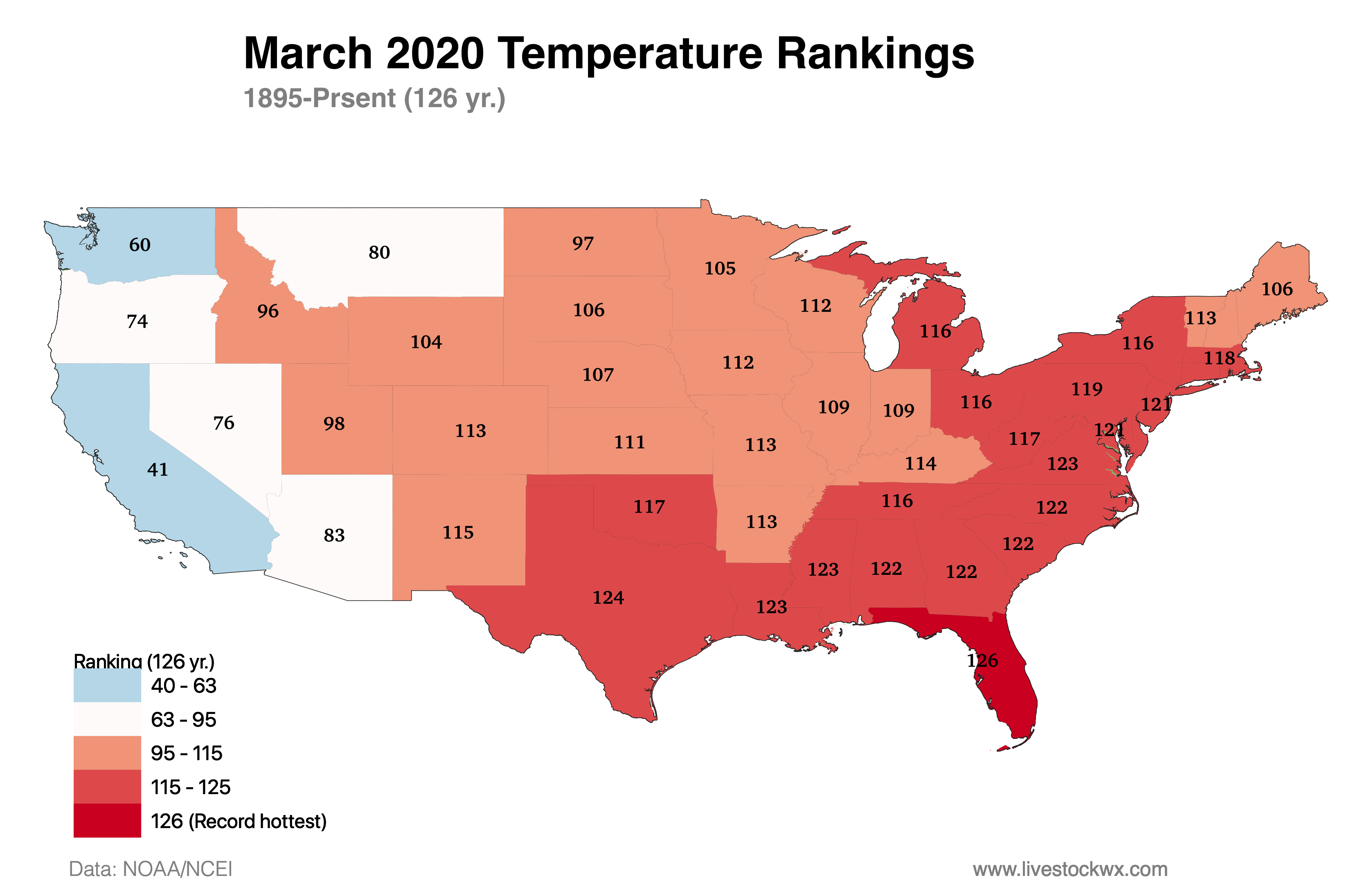 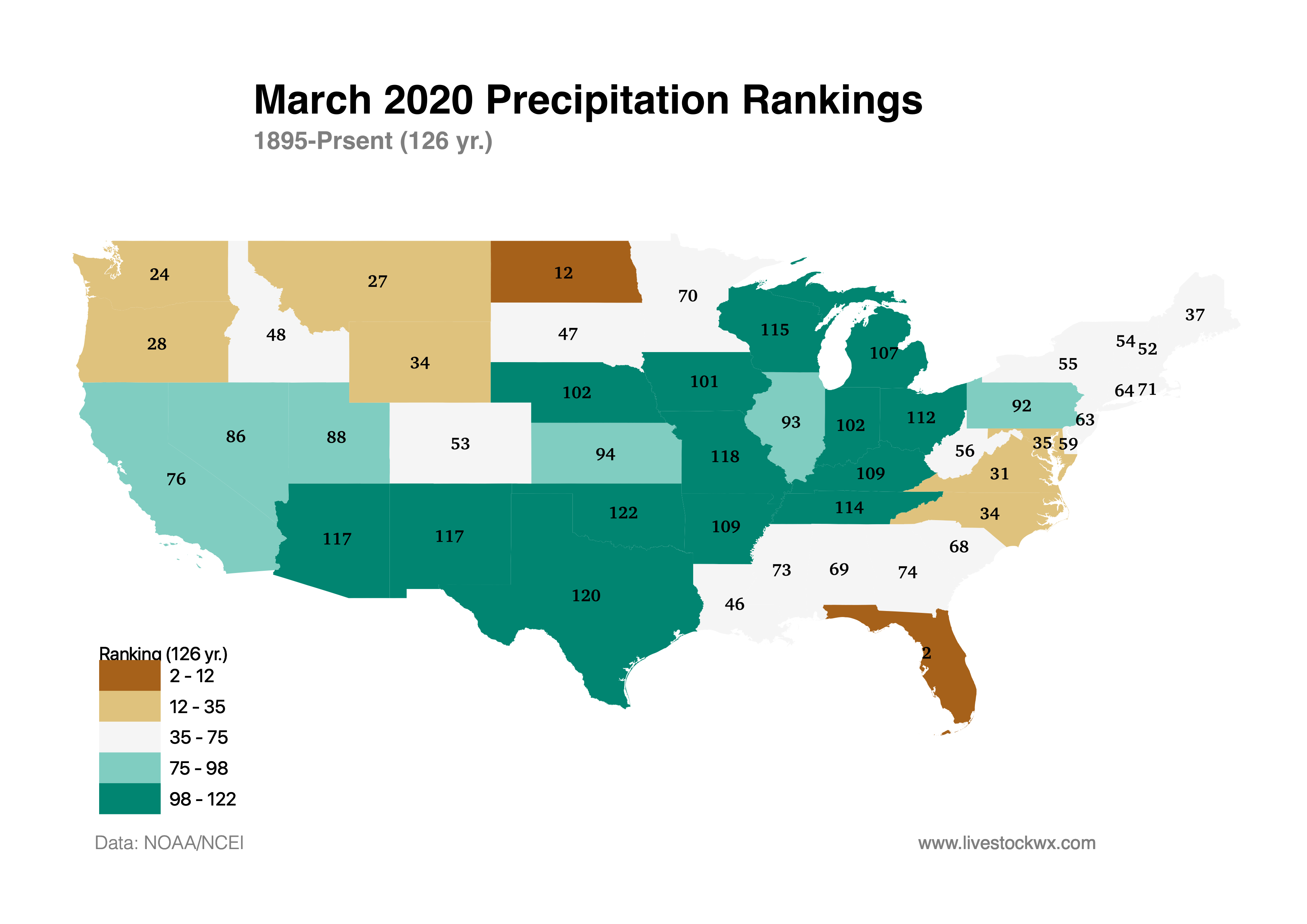 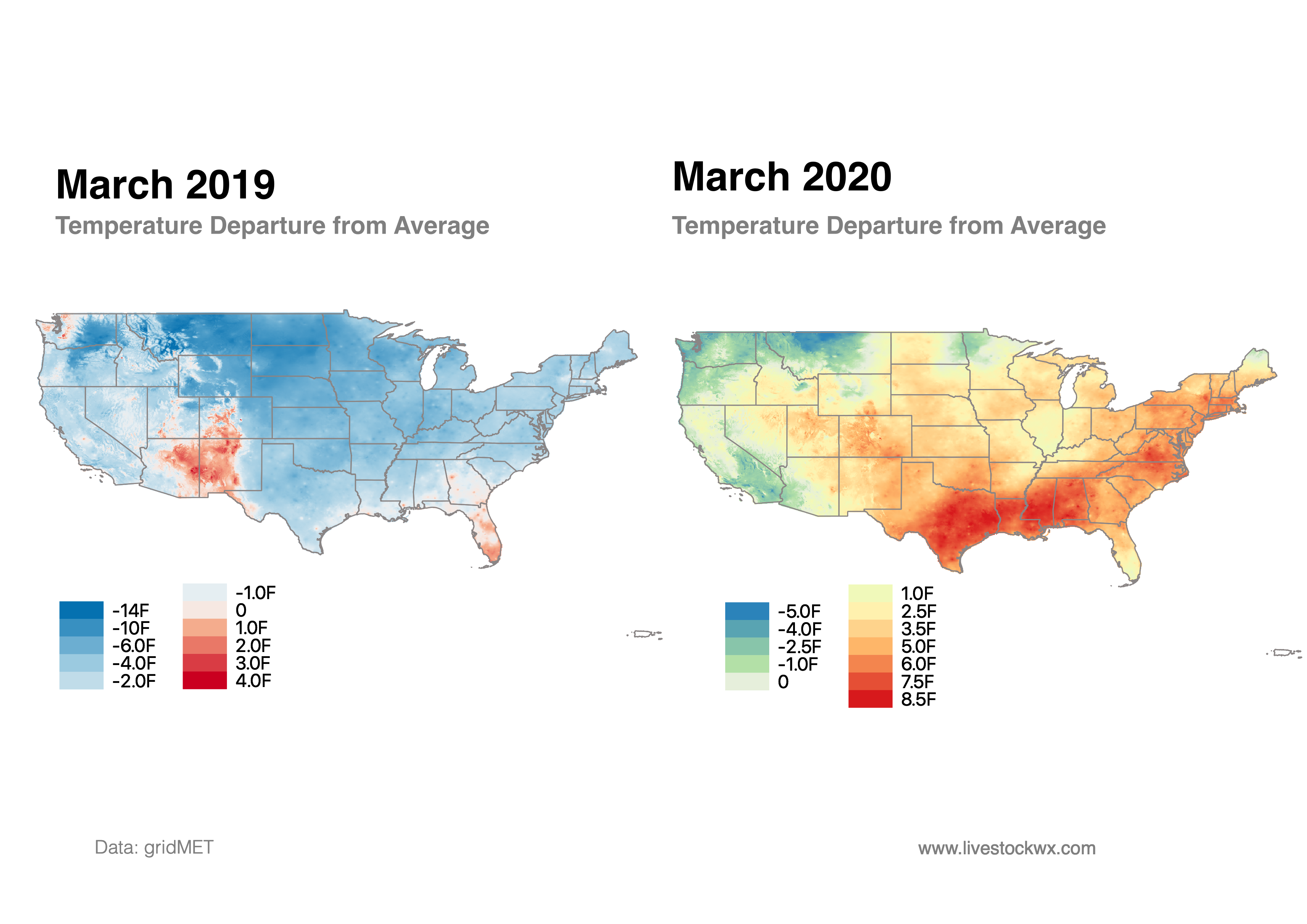 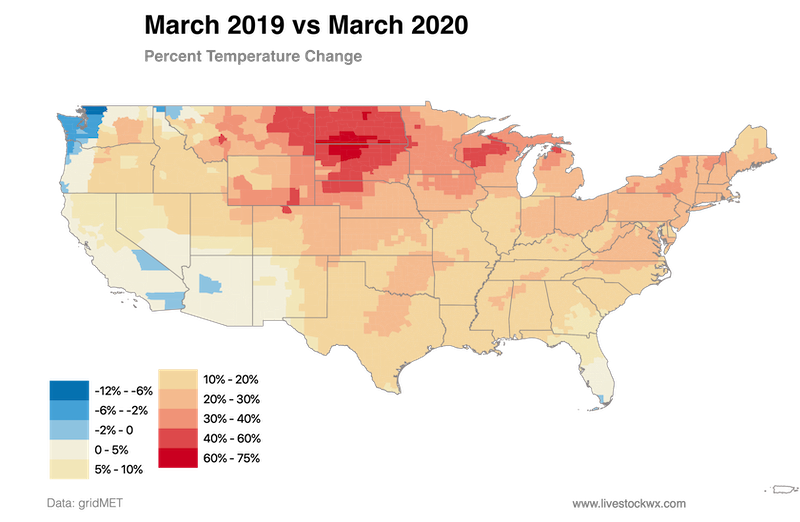 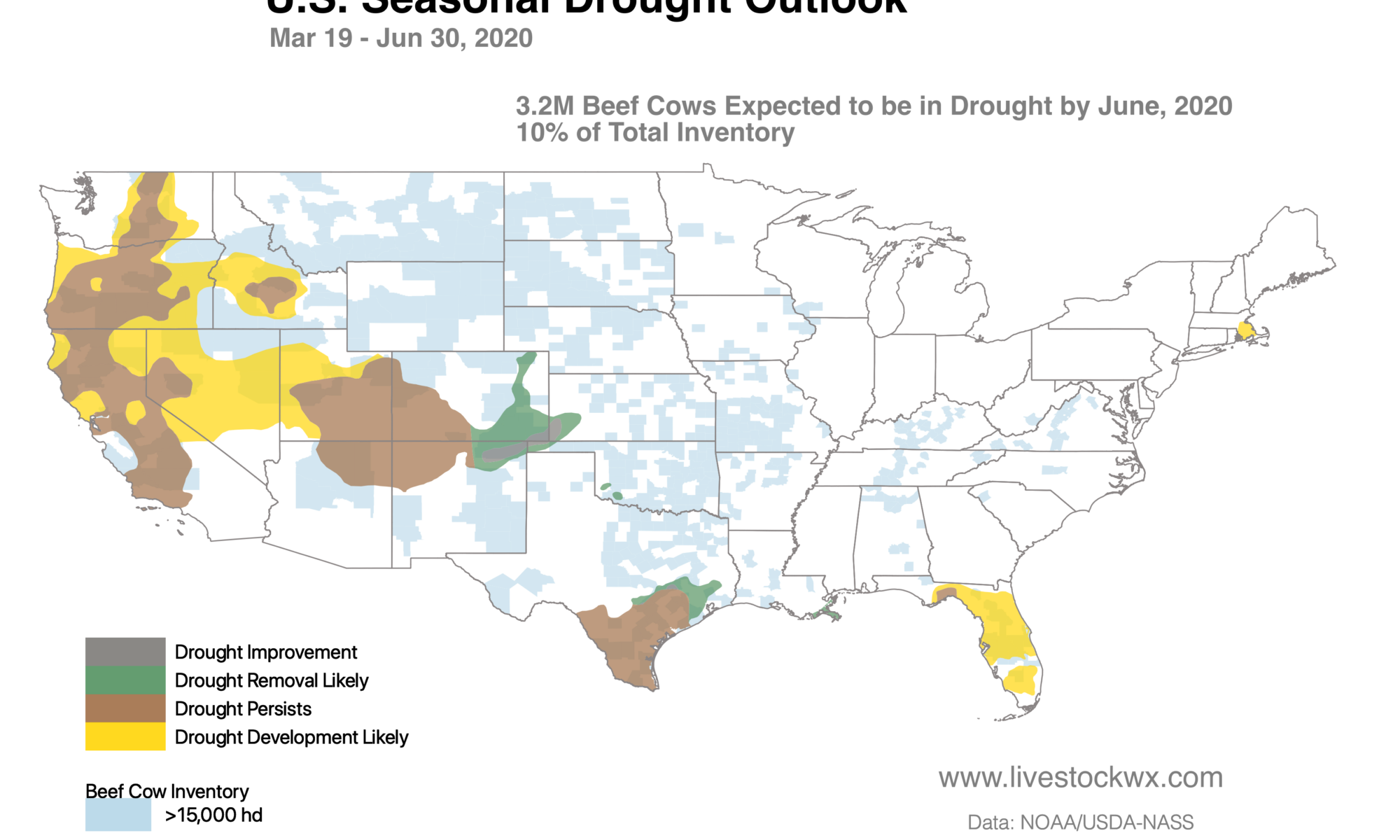 Seasonal Drought Outlook Update for Apr-May-Jun 3.2M Beef Cows Could be in Drought by end of June

The U.S. Seasonal Drought Outlook was released on March 19, 2020, and is valid from March 19 to June 30, 2020.  It is a subjective assessment of the U.S. Drought Monitor and the NOAA Three Month Outlooks.  The Outlook helps predict whether drought will emerge, stay the same or get better in the next three months.

The Seasonal Drought Outlook for the next three months shows a relatively large area along the West Coast and Southwest will be experiencing drought.  Florida has also popped as an area to watch after experiencing one of their warmest and driest March’s on record. 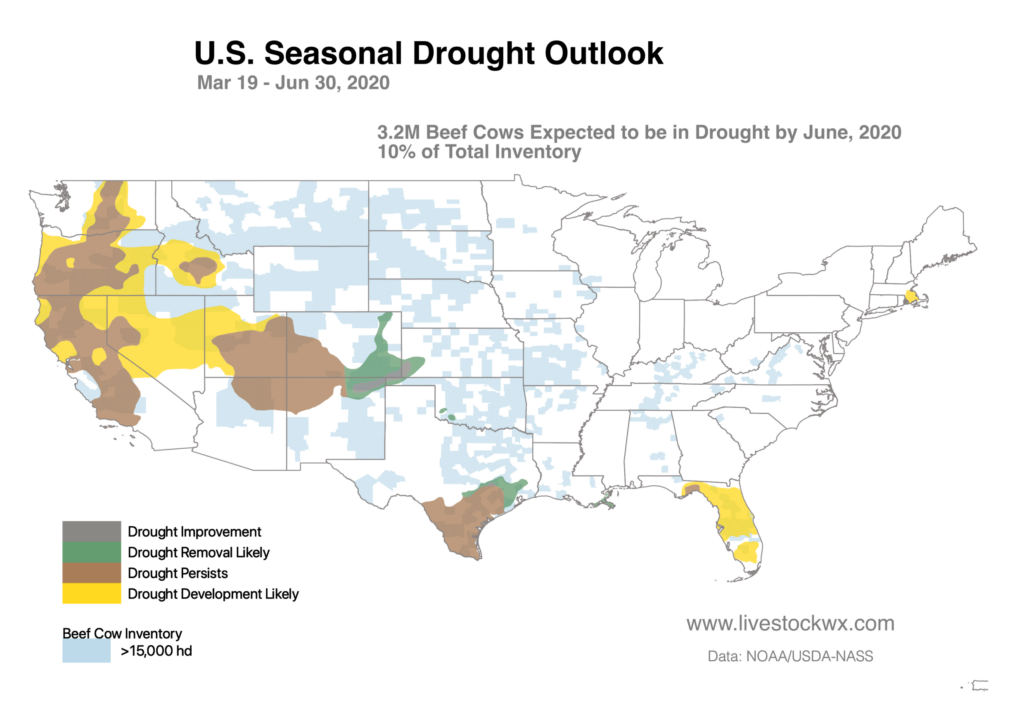 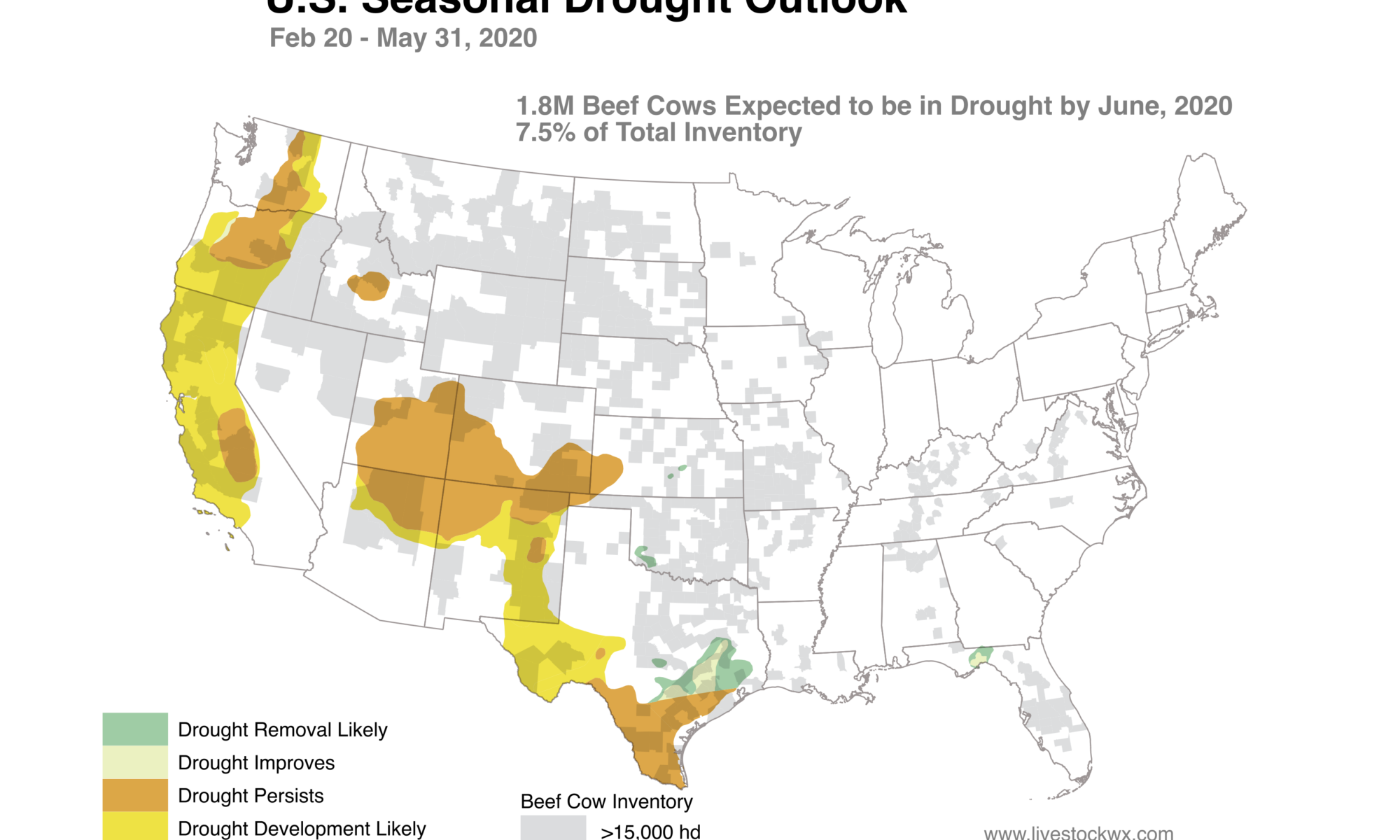 The U.S. Seasonal Drought Outlook was released on February 20, 2020, and is valid from February 20 to May 31, 2020.  It is a subjective assessment of the U.S. Drought Monitor and the NOAA Three Month Outlooks.  The Outlook helps predict whether drought will emerge, stay the same or get better in the next three months.

The Seasonal Drought Outlook for the next three months shows a relatively large area along the West Coast and Southwest will be experiencing drought. 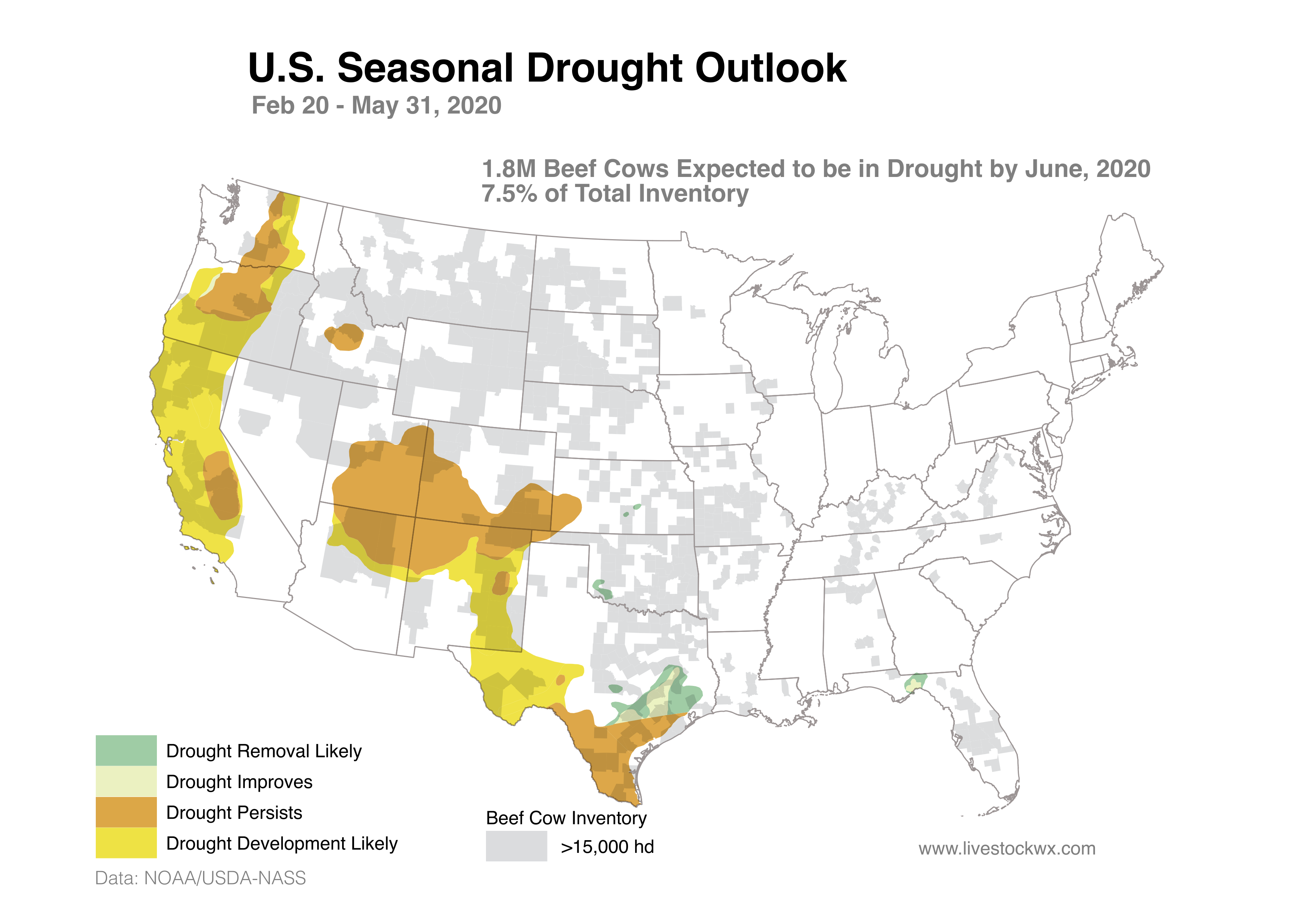 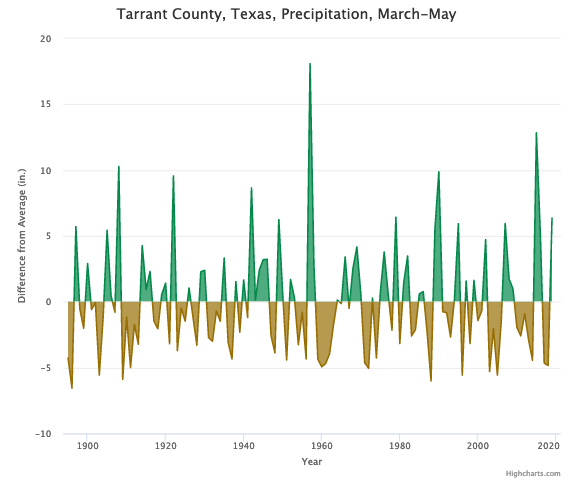 Anyone can Look at Average Precipitation. Don’t Be Average! Check Out Livestock Wx’s Latest Product for Estimating Precipitation Frequency

We are used to thinking in averages but for precipitation it is probably more helpful to think about it in terms of frequency of the most commonly occurring amounts for a season, month, or whatever timeframe you might be interested in looking at.  That is what the Tool we are introducing today will allow you to do.  The tool uses data from NOAA going back to 1895. We have also created a guide on how to use the product, which can be downloaded below.

The Tool was developed by Dr. Becky Bolinger from Colorado State University and came out of a discussion with the East Co Group, who is a provider of the Pasture, Rangeland, and Forage Insurance.  Dr. Bolinger wrote an article on the topic in November of last year.  We will be reposting that article in the coming days for those that would like to see a slightly deeper dive on the topic.

Please take a test-drive of the Precipitation Tool and let us know if you have any questions or ways it could be improved.

How to Use the Tool 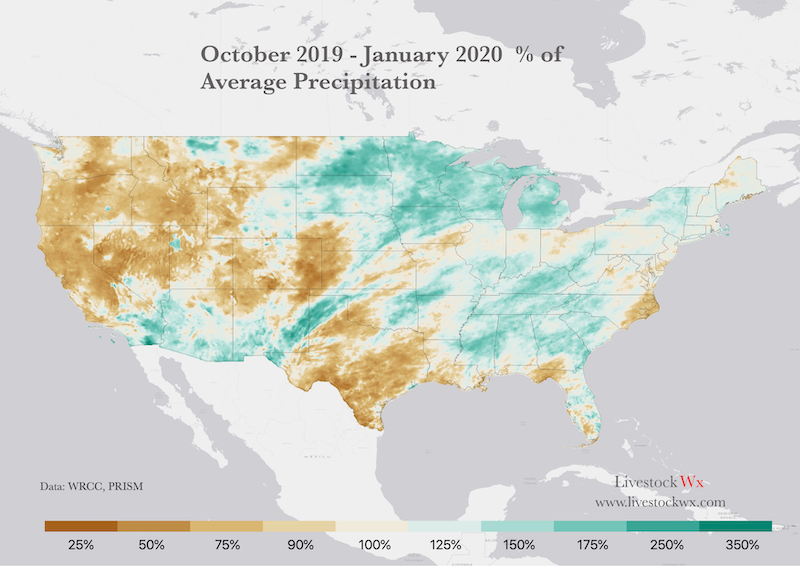 Here at Livestock Wx we thought it would be good to do a check-in on how the 2020 Water Year is looking so far and who the early winners and losers in terms of precipitation.  Please note, however, that just like not enough precipitation is problematic, too much of it can be just as bad if not worse.

So far, there are some clear “winners” so far and that includes most of the eastern half of the country while parts of Texas and the West could be considered in the “loser” or not enough moisture category.  Some places like the Pacific Northwest have had a very strong last couple of months so we expect parts of that area to come back somewhat. 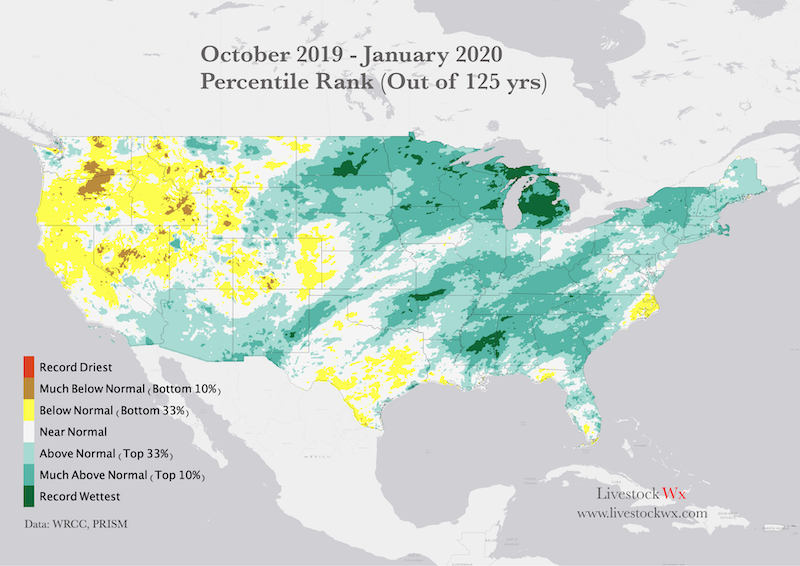 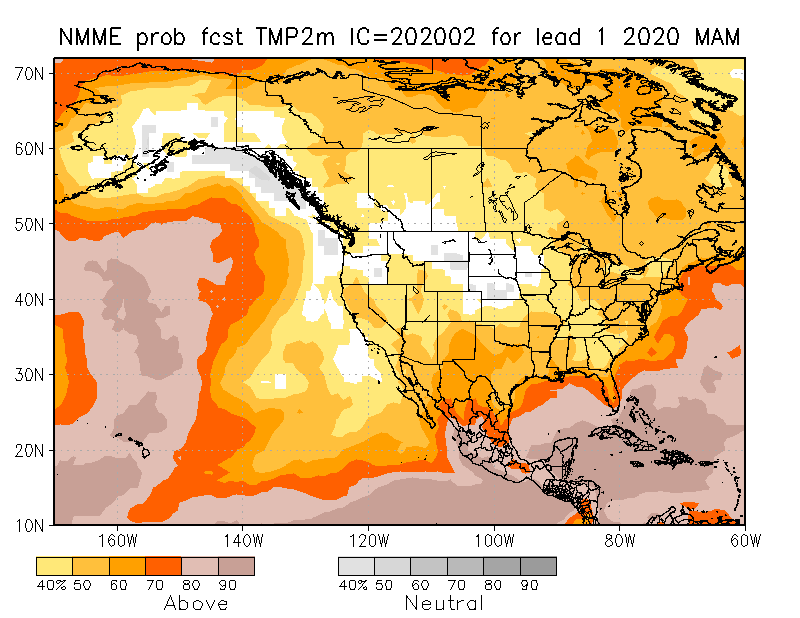 The North American Multi-Model Ensemble forecast, or NMME, was released this week.  The NMME is a collaboration of the National Weather Service and several university partners to produce a consensus seasonal forecast using a suite of different climate models.

NOAA will release its official outlooks for March-April-May next Thursday (Feb. 20th).  Since they utilize the NMME models in their official forecast consider this a sneak preview. 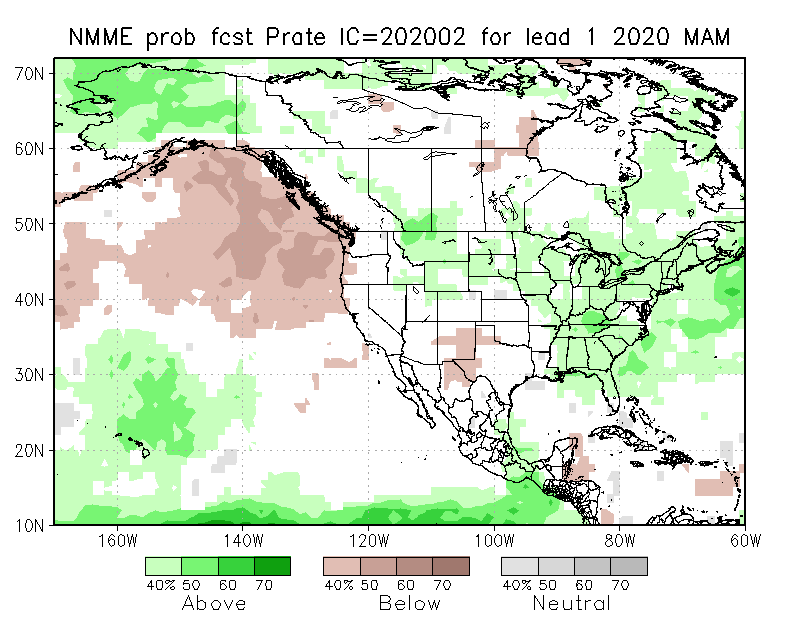