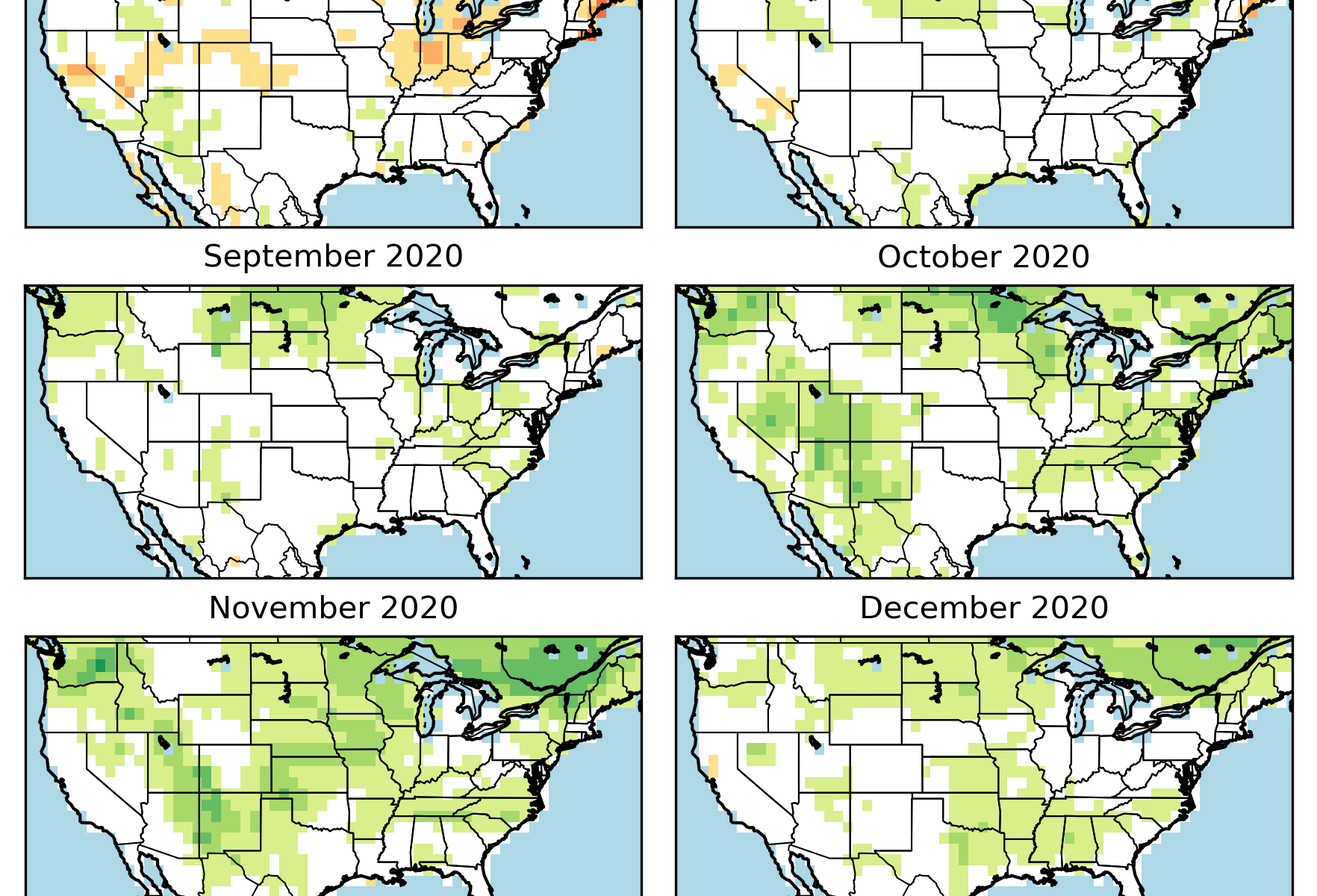 The latest outlooks for temperature and precipitation were released from the North American Multi-Model Ensemble this week.  The Outlooks include the monthly forecast for August as well as the seasonal forecast for Aug-Sep-Oct.

This month we also have included an evaporative demand forecast that is being produced by NOAA’s Physical Sciences Center.  The forecast is part of a relatively new drought index called the Evaporative Demand Drought Index (EDDI-pronounced Eddie).  The EDDI assesses how much pressure the atmosphere is applying to moisture and thus moving it out of plants and the soil.

More recently EDDI was expanded to include a forecast.  The reason this is interesting is that EDDI is good at tracking drought but does not directly measure precipitation.  It only measures temperature, solar intensity, humidity, and wind speed.  As most people know, forecasting precipitation, especially in the summer, is extremely difficult.  Forecasting the components of EDDI, though, is something we are actually relatively good at and in a way gets around relying on a precipitation forecast. We have included below the EDDI forecast starting in July and going all the way into December.  Probably not a good idea to look too carefully at what could happen in December, but the next three months is fair game and not a stretch for the CFS forecast model EDDI is using.

It surprised us somewhat they are not expecting to not see much drying outside of July.  When compared below to the NMME model output for August and the Aug-Sep-Oct, we see this is somewhat supported by the multi model ensemble from the NMME. 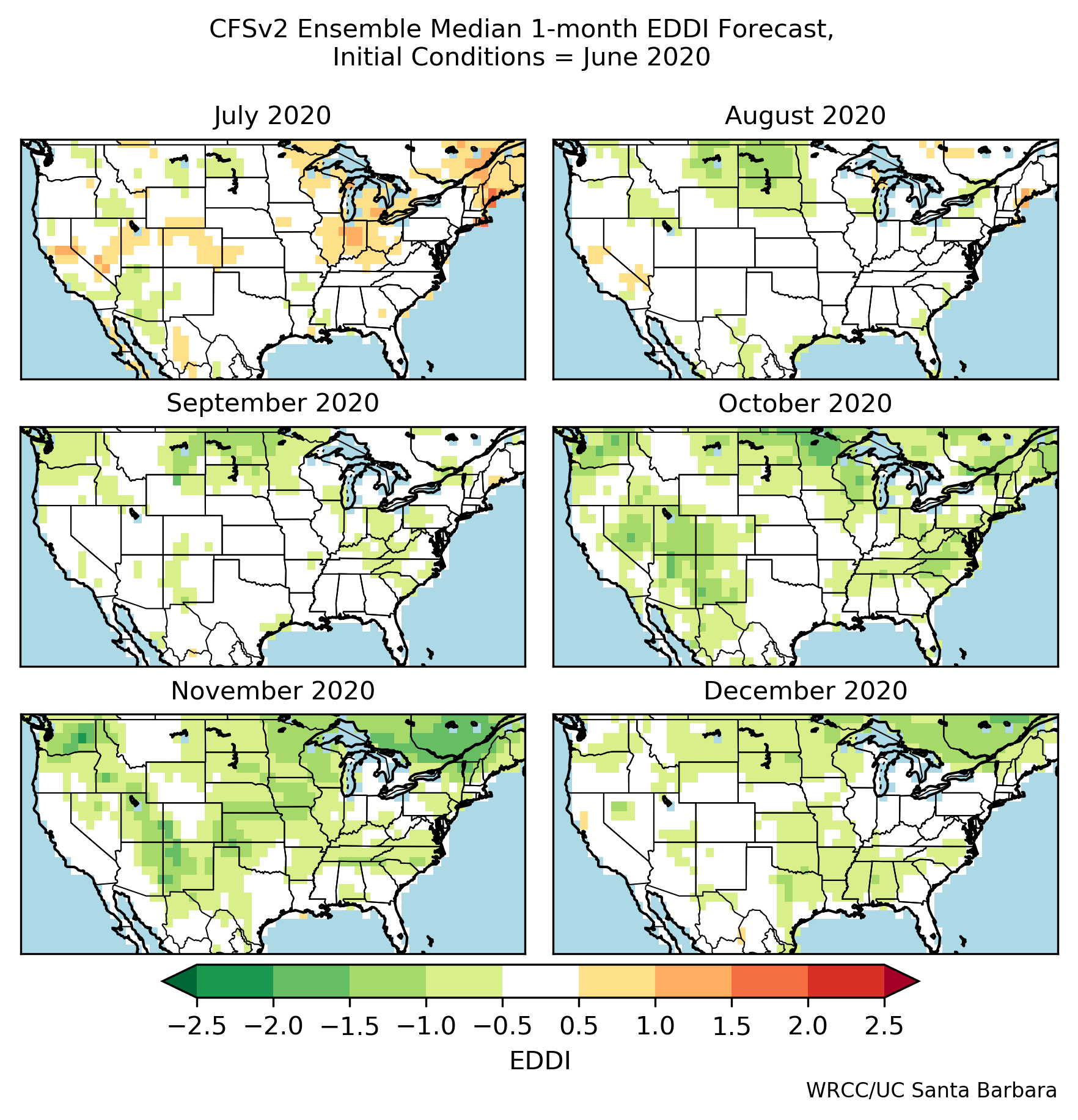 Now, back to the NMME model output.  The monthly outlook maps are below.  For temperature, a warmer than normal August is expected for a large part of the country.  The odds are strongest for the Plains/Southwest/West.

August precipitation is less clear, although, we see some enhanced odds in parts of Oklahoma, Texas, the Northern Plains and the Southeast. 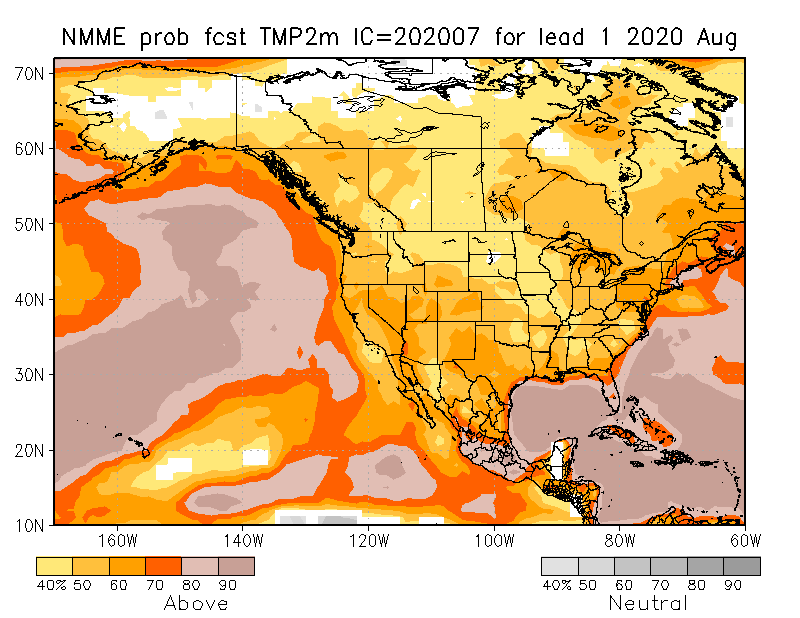 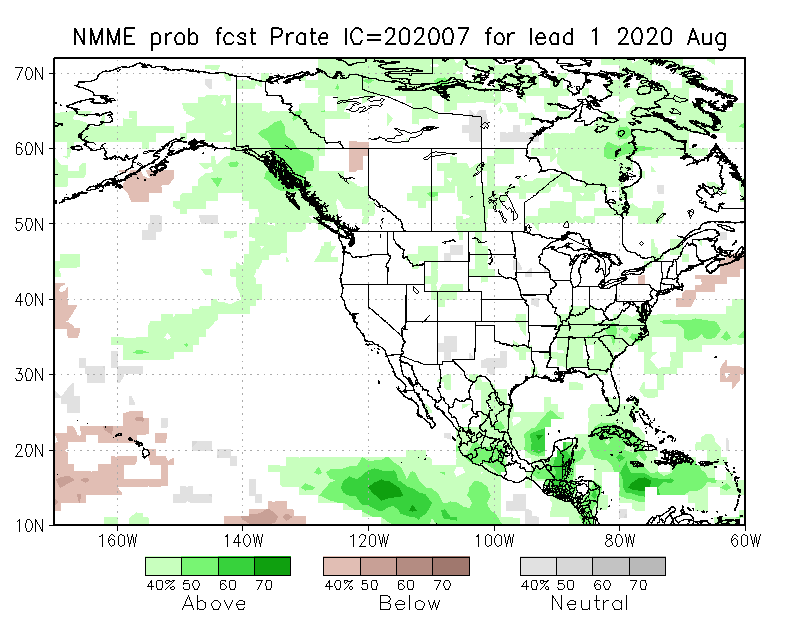 Somewhat similar to expectations for August, the Seasonal Outlook shows enhanced odds of a warmer than normal Aug-Sep-Oct.  The odds are highest in parts of the Southwest and California.

The NMME output for precipitation for Aug-Sep-Oct is showing a tilt in the odds of higher than normal precipitation in the Dakotas and parts of the Southeast.  Below average precipitation could be observed in parts of Colorado, Oklahoma, and Kansas.  The odds are relatively weak, though, and it doesn’t appear there is a strong regional trend among the NMME models for the Central Plains. 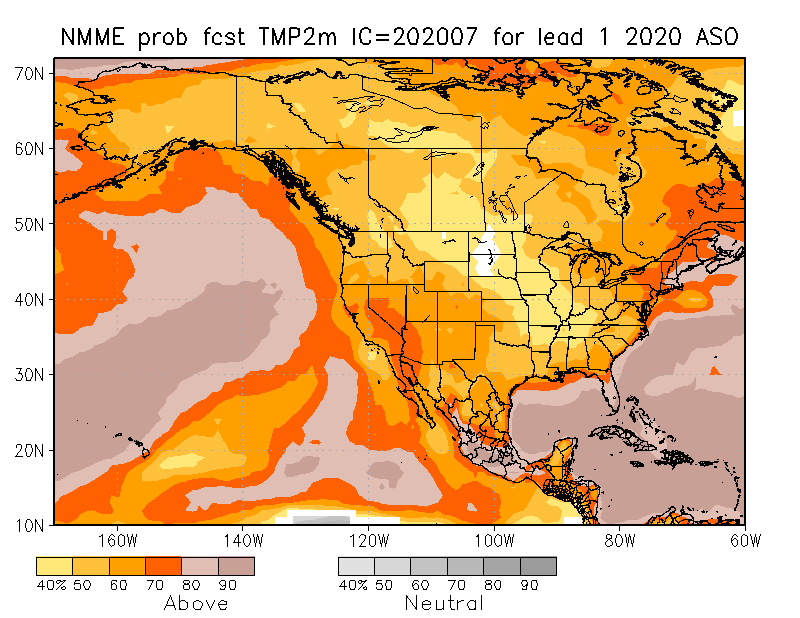 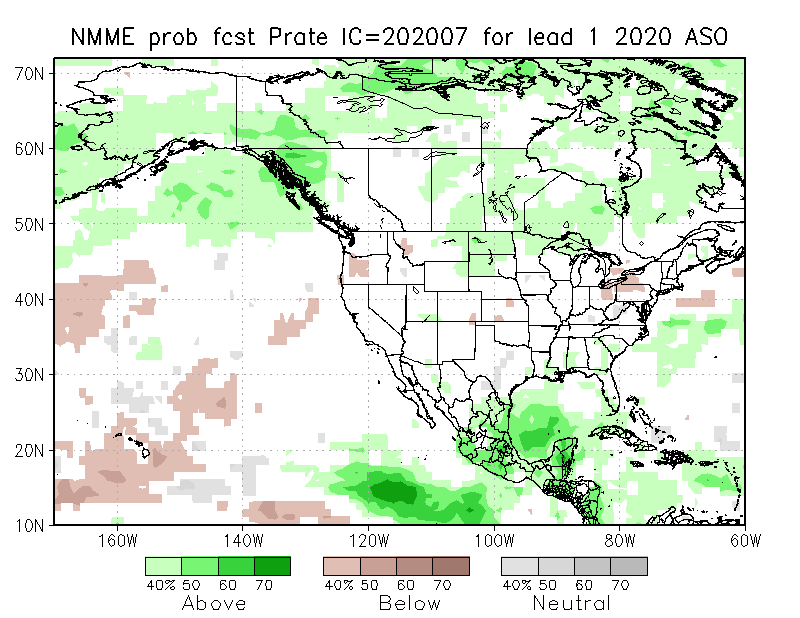 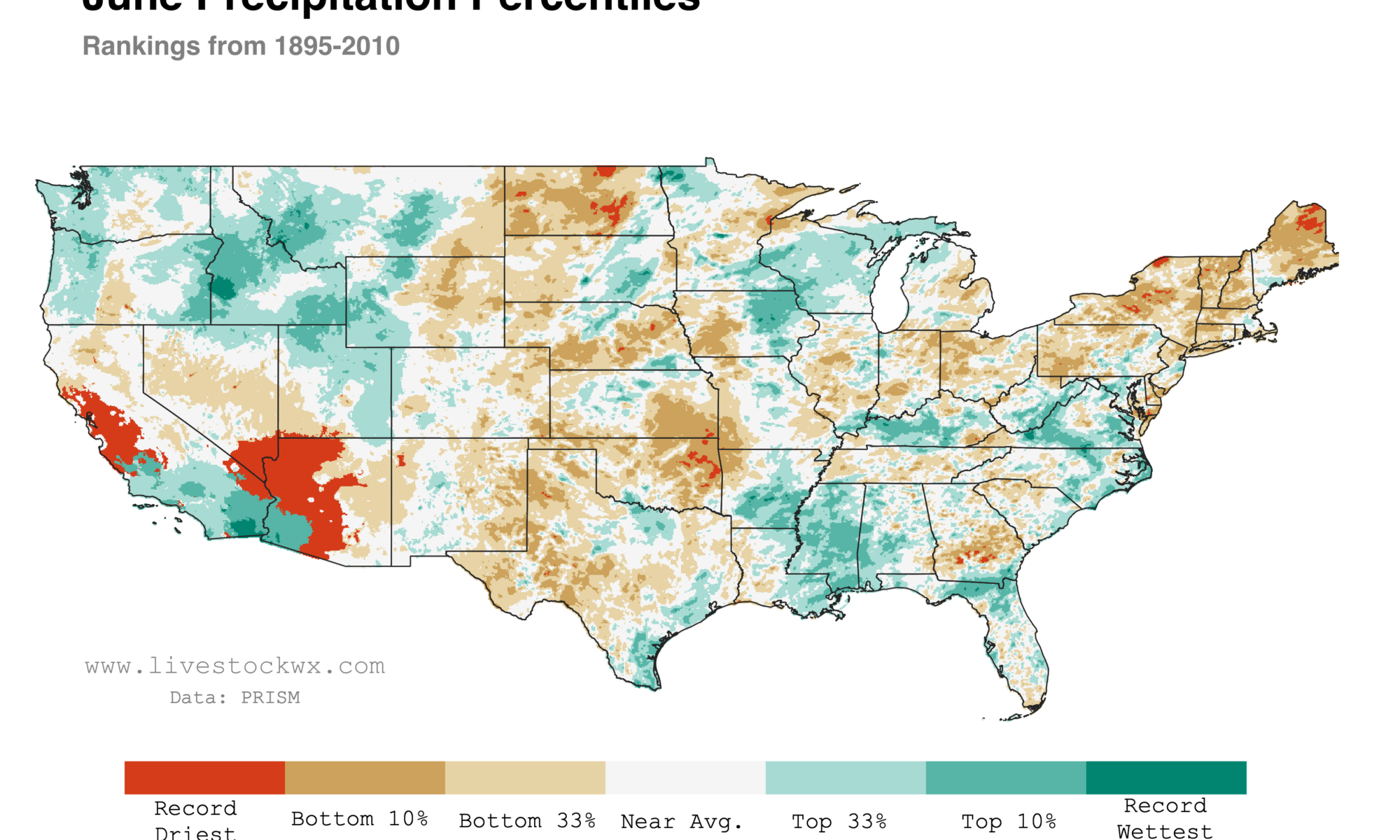 June Temperature and Precipitations Stats Are Out. Record Driest June in Parts of Southwest, Northeast Oklahoma, and New England

The June temperature and precipitation stats are out.  Over the last month temperatures (map immediately below) have been above normal for most of the central part of the Country.  Temperatures were particularly warm, and in the top 10 percentile, along an axis going from Arizona to Minnesota. 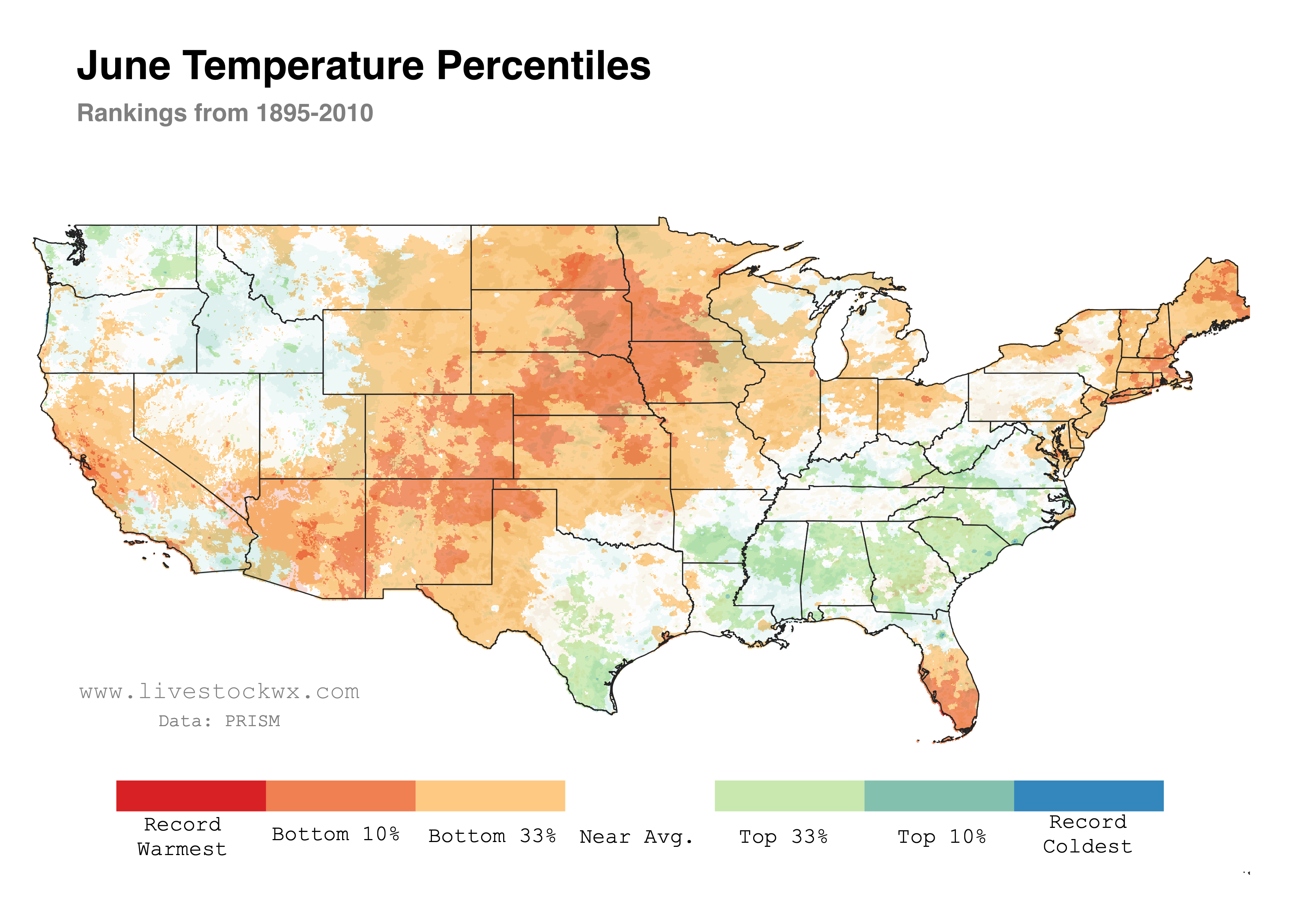 For precipitation, parts of the Pacific Northwest, Gulf Coast, and the Upper Midwest observed above normal levels.  Much off cattle country, however, saw less than average totals.  Northeast Oklahoma, parts of North Dakota, and New England observed their driest June on record.  A large part of the Southwest and California also record low precipitation totals. 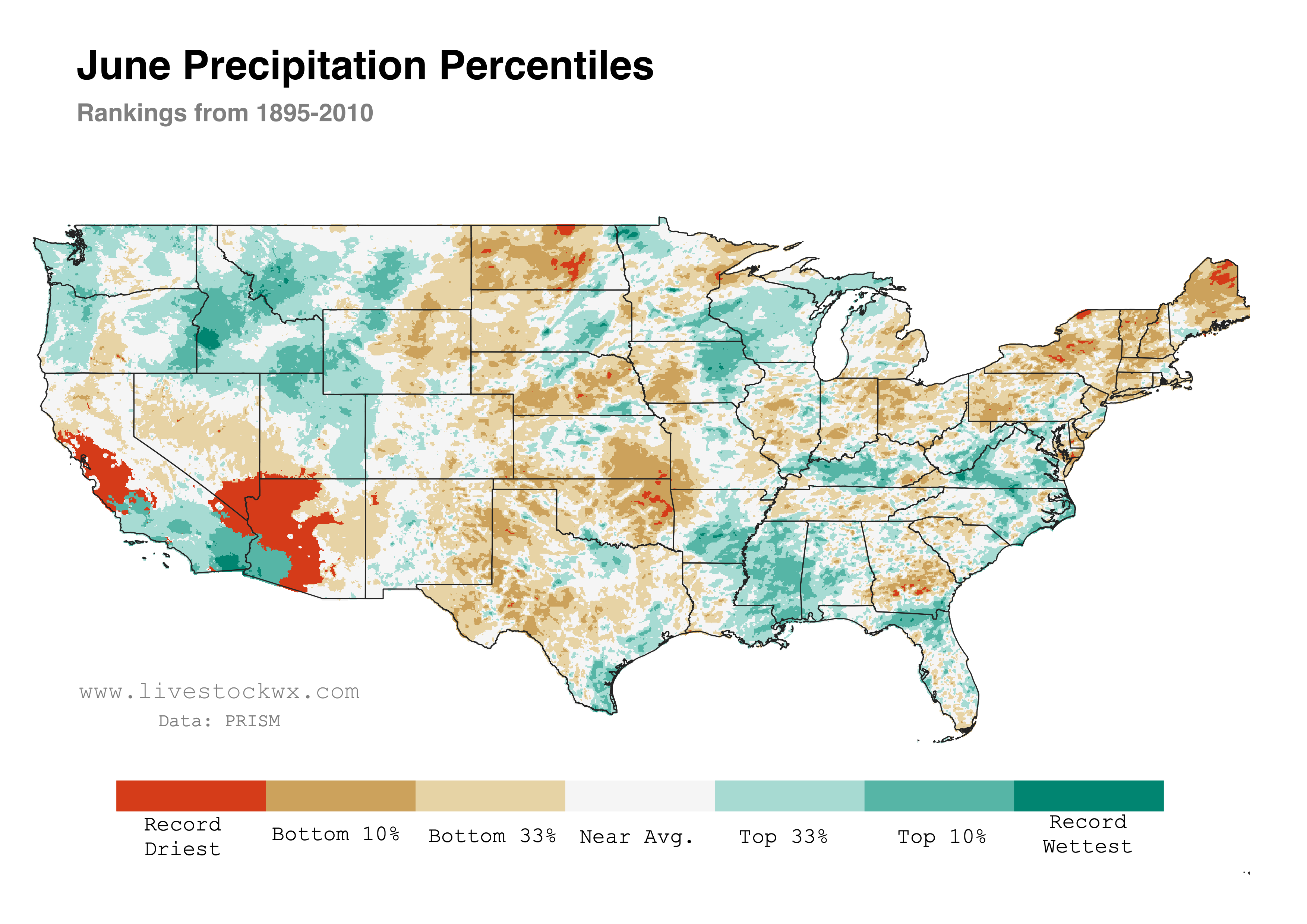 Unfortunately as is usual in the summer months, drought is centered across the Plains and the Western States (map at right).  At present there is no D4 (Exceptional Drought), the highest drought category the U.S. Drought Monitor has, but there is plenty of D3 (Extreme Drought).

The second map below shows how drought has changed over the last month.  Yellow/brown colors represent where drought has expanded and or strengthen, while green/blue indicates where drought has improved.  Consistent with the June precipitation trends we see expansion of drought over the last month in Oklahoma, Kansas, and parts of the Oklahoma/Texas Panhandle.  For the Northern Plains, Central Wyoming and western South Dakota have also observed a large expansion/intensification of drought.  Likewise, the Northeast has observed a large part of their region in drought.  Particularly hit hard is Maine. 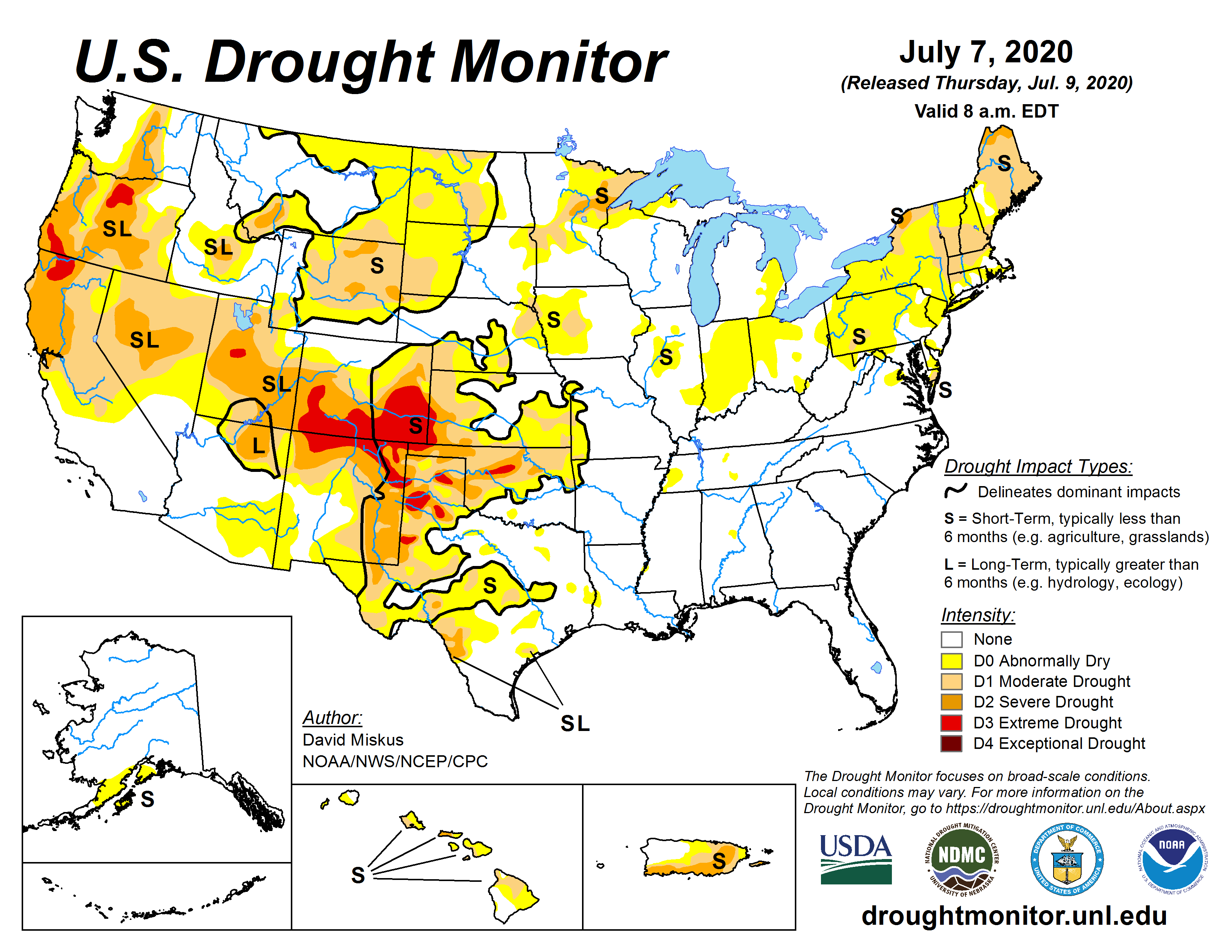 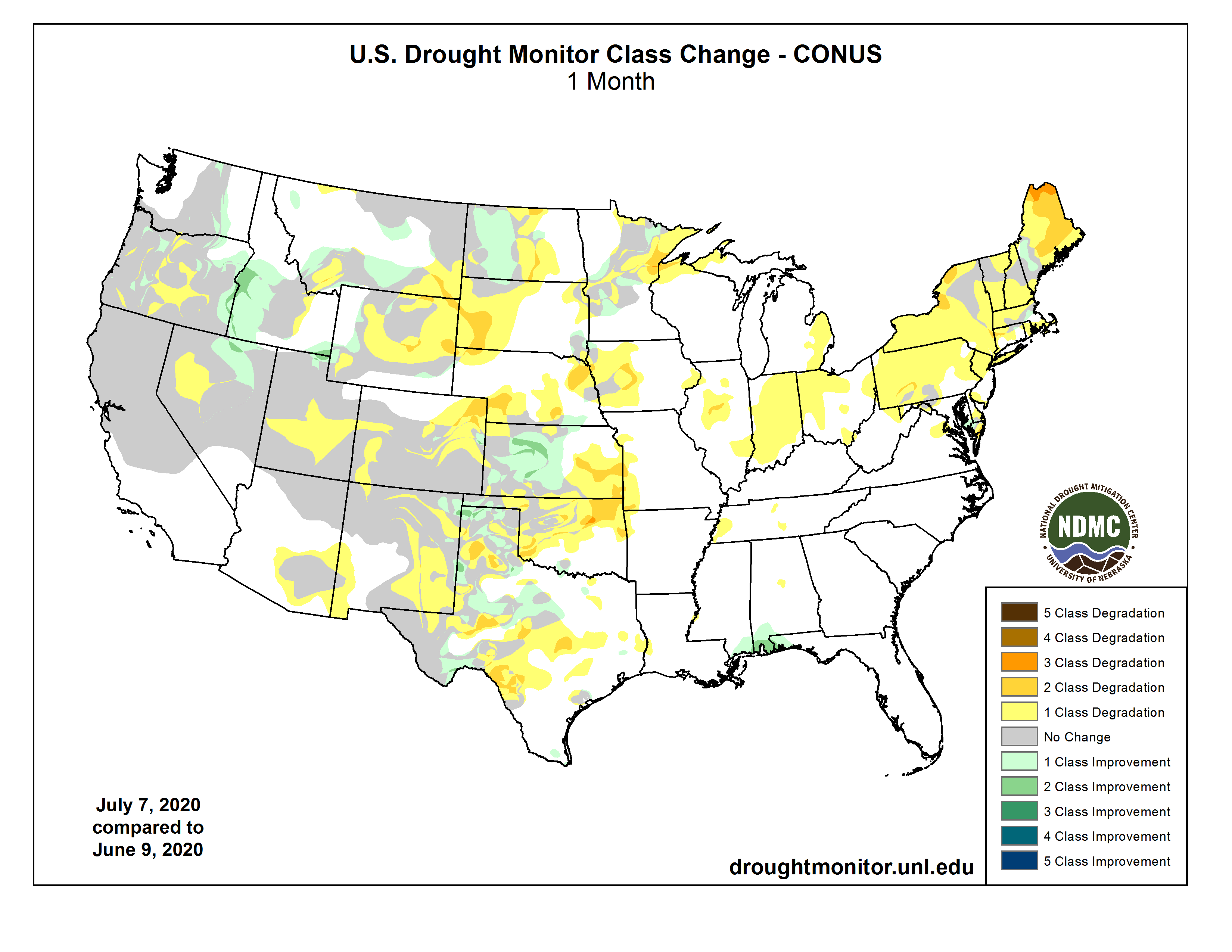 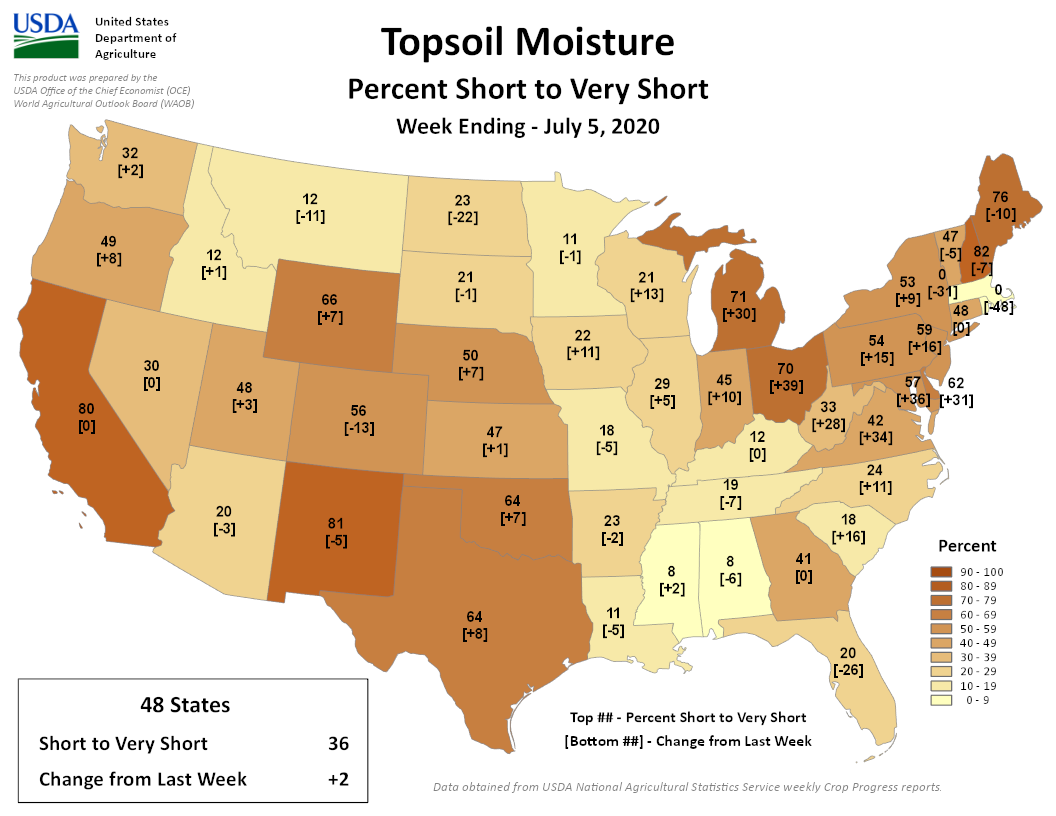 To round out the discussion, the above map shows USDA’s estimate of the percentage of topsoil considered short or very short moisture.  Cattle country states trending the wrong way include Texas, Oklahoma, Kansas, Nebraska, Iowa, and Wyoming.